“What’s it Mean if My Kid’s Gums Bleed?” 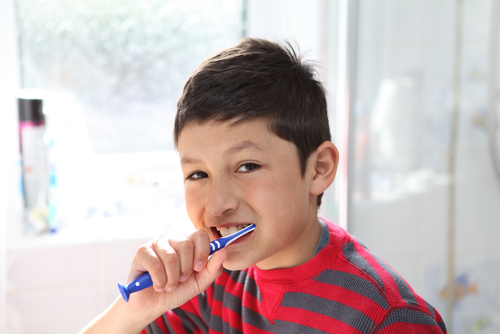 Occasionally parents of our patients come to us wondering if it’s normal for their kid’s gums to bleed and if it’s something they should worry about. Despite common belief, it’s not normal for gums to bleed, and it’s always a concern, especially for our children’s dental office in Erdenheim. In this blog, we cover some of the most common reasons kids (and adults!) experience gum bleeding.

We encourage all of our patients to get in the habit of brushing their teeth as early as possible. However, it’s pretty common for children and adults alike to brush using too much pressure. Brushing too hard can wear down the protective enamel, leaving teeth at greater risk for decay and cavities. Over-brushing also tends to contribute to gum damage, hence the bleeding gums.

When a child first begins flossing their teeth, it’s common for them to experience some gum bleeding. The tissues in between teeth are delicate and can become irritated upon initial flossing. If this seems to be the case with your child, don’t worry. The bleeding should go away on its own in about a week.

Certain medications can directly affect the mouth and cause gum inflammation. If this occurs, gums become more sensitive and could begin to bleed. If your child just started a new medication and the gum bleeding began around the same time, the medicine may be to blame. Don’t change the recommended dosage, but do supervise them while brushing and make sure they’re using soft, gentle circles.

Typically gum bleeding caused by any of the above should stop once the medicine regimen is completed or brushing and flossing habits are changed. If it doesn’t, it may be a sign of gum disease. Gum disease is usually caused by poor oral hygiene and a buildup of plaque. Make sure your child is brushing gently with a soft-bristled toothbrush twice a day, and flossing properly once a day. If the bleeding is an ongoing problem, it’s best to see your kid’s dentist in Erdenheim as soon as you can to get a proper diagnosis and begin any recommended remedy.

Is your child experiencing gum bleeding? Give our Erdenheim children’s dental office a call today. We’ll be happy to help!